I am so grateful to my parents for introducing me to such a fantastic film, everything about it is engaging. The actors, the narrative, the plot twists, the idyllic scenery… everything about this film was mastered perfectly and I wouldn’t change a thing.

Dirty Rotten Scoundrels (18988) stars Michael Caine as a stylish, high-class con artist who has settled and made his millions in a luxurious coastal resort, where he attracts the wealthiest women to scam. He thinks he’s got it easy until Steve Martin shows up and starts to compete, Caine finds his lowbrow tactics hilarious and decides to challenge him to a winner-takes-all competition. Whoever looses has to leave town.

Although from my quick brief outline of the plot the narrative does not seem that enticing, but I can assure you it is absolutely brilliant. Both Caine and Martin are in their element, playing characters that fit their personas so well. Caine being a posh, English intelligent man who knows how to dress and Martin being a loud, boisterous American who does not know when to quit. Both actors are captivating to watch and I thoroughly enjoyed watching them work so well together, the chemistry between them carried the film even thought they are an unlikely pairing.

I never would have guessed they’d work well together, perhaps their characters were so different that it worked well for me? But overall, I thought they bounced off of each other and brought some excellent comedy but most of all Ruprecht stole the show! 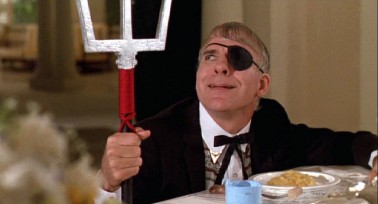 The writing was perfect, of course the acting is great but all of the jokes in this film were down to the writing. The narrative was so well thought out, each scheme and scam was plotted out so well. The story flowed between each plot making the film seem so fast paced, it was as though they never stopped tricking each other and one upping each other. It almost felt like the film was never going to end but in saying that the ending was magnificent. Now that was a plot twist! No spoilers but I was very impressed, you have to watch this film just to know what the ending is or you are missing out.

Overall, this film shocked me. I was not expecting it to be so witty and funny throughout, I laughed my head off at the acting and the brilliantly cringe worthy story itself. Every little touch made this film feel so new and fresh to me even though it came out 30 years ago!

I would recommend you watch this film, just for the old fashioned humour and amazing plot.