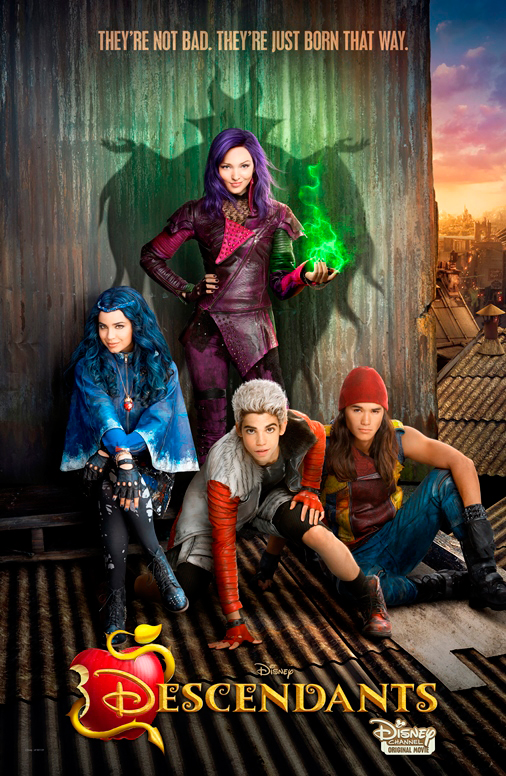 Disney’s Descendants (2015) does not hesitate to pull you into the fantasy. Beginning with the iconic story book opening, revealing the plot that Ben, the teenaged son of King Beast and Queen Belle, invites the exiled children of defeated villains to attend a prep school with the heroes’ children. Initially I was afraid this modern idea would back fire and not do the original villains justice, but I was really impressed with the characterisation of each character and the fun, young twist to an old classic tale.

Yes, this is a Disney channel movie so the target audience is for young children, but Disney are clever and they know adults will be made to watch it too. Adding in some humour, puns and funny comments which wouldn’t get through to the kids. The typical iconography of villains, heroes, dancing and breaking out into song are all apparent but it fits and come on who doesn’t love a happily ever after story. The dance sequences are very slick and look professional. The songs aren’t number one material but there catchy and easy to sing along to, which is all Disney wants.

Dove Cameron (Mal), Sofia Carson (Evie), Cameron Boyce (Carlos) and Booboo Stewart (Jay) all play the children of Disney’s most infamous villains. I think you can guess which ones which by their very simplistic names, Mal is Maleficent’s daughter, Evie is the Evil Queens daughter, Carlos of Cruella DeVille’s son and Jay is Jafar’s son. They couldn’t get any more creative than that? Really, come on it’s Disney. On the other hand the costumes are very representative of their parents, if their names weren’t so obvious you could defiantly tell which ones which by their outfits. Apart from this I have to acknowledge the acting ability of each new comer. I was very impressed, all can dance, sing and act very well. Also the cameo of Kristin Chenoweth (Maleficent) who’s a star at both acting and singing, I was very glad to see her face.

Rotten to the core.